Your Voice Has Not Been Approved

I’ve been a very quiet blogger lately, quiet enough that you may have suspected I’d quit blogging. Hell, even I suspected I’d quit blogging. I’d started a new career, been published, moved house, got two new insanely adorable kittens, and was busy raising two rather challenging children. So what has pulled me back? An old issue that seems to just keep getting worse: The invalidation of people’s experiences of autism if they don’t exactly match other people’s preferred terminology and agenda. (The most recent example of the issue that I’ve encountered, is expressed in this post, but it’s the further discussion of that post on social media that exemplified the issue for me.)

It’s as if there is a singular approved version of what you’re allowed to share, and what words you’re allowed to share it in. Any variation from approved language and message, gets attacked loudly and righteously, not because what the person said wasn’t true or wasn’t genuine, but because it didn’t match those other people’s ideas of what is acceptable when talking about autism. Somehow along the way, these attackers came to believe that the way someone shares their own personal experience, is more important and noteworthy than the experience itself. I find this bizarre and disturbing, and frankly, I find it lazy and nasty on behalf of the attackers.

It’s bizarre, because we should want people to find understanding and support if they are finding it hard to understand and live with autism or an autistic individual; not shut them down and force them to keep quiet until they learn others’ preferred language and terminology. Is this not particularly bizarre when it comes from the exact same people who talk about how important it is to accept different and new forms of communication from those who struggle to talk at all? Is it genuine when someone says in one breath “we must accept the efforts of people to communicate in whatever form that takes” and in the next breath “but those people over there used the wrong words or were off message so we need to shut their voices down”?

It’s disturbing, because it’s a type of censorship, not just of the voices, but of the experiences shared by those voices. These attackers seem to desire a sanitized and controlled view of autism, where only the stories that match their narrative deserve a audience, and those that don’t are destined to get buried in attacks about language and hidden agendas they’ve built into someone else’s tale.

Lazy, because it’s so easy to attack language and restructure everything you read into being about your preferred topic (abelism, murder of the disabled, etc), rather than engage with the substance of what someone is sharing. It is far more challenging – and valuable – to try to really take in what the writer is sharing and to respond to their experiences in a helpful or compassionate way.

It is nasty, because the attackers are frustrating the heart-felt efforts of someone to share their life, their emotions, their reality. They are denying the value of the writer’s experience, in favour of attacking terminology and agendas that aren’t even there.

It’s OK that not every story about autism is told from the perspective of the autistic individual; parents and carers have voices – and experiences – too. The sharing of those experiences and perspectives does not invalidate the experiences of the autistic individual. They sit alongside it. They are part of the full story. In fact, it would arguably be disingenuous is they claimed to be telling the story completely from the perspective of their non-verbal child. If the only alternative you give them is to not share their story at all, how is that a reasonable stance to take?

It’s OK if someone doesn’t know – or doesn’t want to use – other people’s preferred terminology. Terminology is constantly being debated, fought over, redefined and given new and often conflicting subtext, so it’s arrogant and unhelpful to tell someone the words they’ve chosen to share their story means the story shouldn’t be heard.

As a final point, it is particularly arrogant to redefine and restructure someone else’s lived experience into your own narrative; to decide that someone’s story is actually about your latest pet issue. To turn someone’s honest story that is told free of any agenda other than to share, into an instance of some insidious plot that you see lurking in every corner.

An individual’s experiences and voice, don’t require approval by those who see themselves as the gatekeepers of the autism narrative. If the experience is honest, if the voice is genuine, then it should not be shut down. Sure you can challenge it, question it, suggest another perspective if you like, and – here’s a thought – consider offering compassion and support in preference to lectures about language.

I feel the need to end with a photo of my kitties. Because they are part of my story, and my experience, and… screw it, I don’t need an excuse. KITTENS! 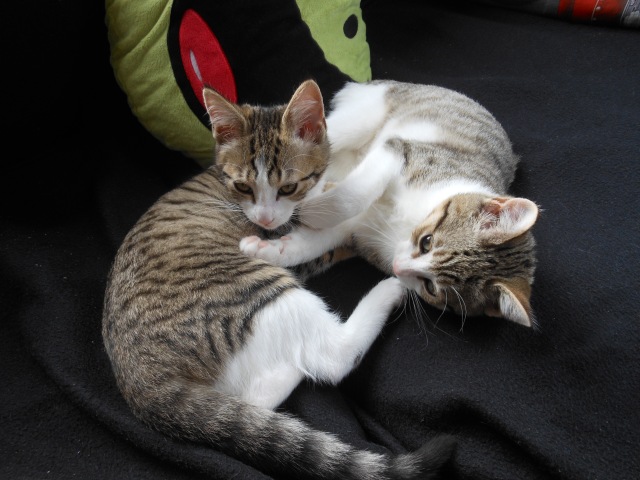 12 Responses to Your Voice Has Not Been Approved